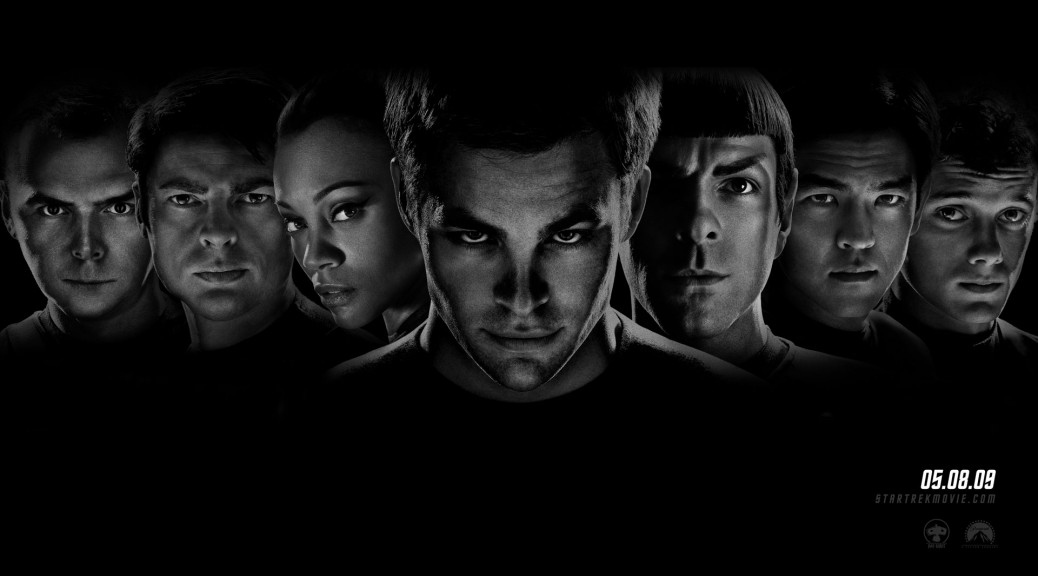 Well y’all knew this was coming.  Star Trekwas a huge influence on my life.  I know whenever someone says something like that, the common response is one of pitious disdain.  But people need to remember that science fiction was a rarity in the early 70s, and smart entertainment accessible by children rarer still.  Even more obscure were role models in such a milieu that were appreciable by ethnicities other than the White North American mainstream.

Star Trek gave us those things, and more.  Mr Spock was an immigrant who could not be invisible, living amongst hatred, but valued for his intellect.  Captain Kirk was a natural leader who solved problems with his head, heart, fists and penis: an admirable template for the real man, so lacking in the earlyy 21st century.

So you just knew I’d be taking a hard look at the newest incarnation of Trek, this “re-imagined” (I’m so sick of this term) version of the early adventures of Kirk and Spock, this time helmed by TV wunderkind J.J. Abrams.

Be warned: spoilers abound in this review.

I never watched Felicity or Alias.  I didn’t much care for Mission Impossible III.  I’m really enjoying Lost and Fringe, however.  All of these are the products of Abrams’ vaunted creative genius. But given the banality of the new movie (annoyingly simply titled, Star Trek instead of what we all know it to be: Star Trek XI), I fear for the culmination of the storyline for Lost, a show I have long hailed as the finest product of broadcast TV currently available.

I’m not sure where to begin with this review, so forgive me as I jump about rather randomly.  Let’s start with the basic declaration: it’s a well produced, adequately acted, fantastic looking and entertaining piece of cinema that will keep you interested throughout it’s 126 minute duration.

In Star Trek I: The Motion Picture, we had an awesome display of science fiction, as the Enterprise must confront a planet-engulfing cloud that turns out to be an evolved version of a NASA probe.  There is a subtext of aging, of Kirk unwilling to let go of his command, and of the moral repercussions of scattering probes willy nilly.

The true Trek masterpiece, The Wrath of Khan, was about Kirk’s inability to come to terms with his failing youth and virility, and about the “no win scenario”.  A magnificent villain, a smarmy son and a sacrificing best friend are all foils against which Kirk explores this personal dilemma.

Star Trek III: The Search for Spock was about sacrifice.  What are you willing to give up to save something you love?  For Kirk to save Spock, he sacrificed his career, his son and his ship.  And in the end, the Spock that was returned to him was a shadow of his former self.  It was darkly hopeful yet bittersweet.

Star Trek IV: The Voyage Home is the one most of the general public seems to enjoy.  I think it’s one of the weakest.  It’s about taking responsibility for environmental damage.  Hamfistedly done, I say.

Star Trek V: The Final Frontier…. um, let’s not talk about this one.

Star Trek VI: The Undiscovered Country was the swan song of the original crew.  A simple tale about the assassination of the Klingon chancellor is really an opportunity for Kirk to be examined for his lifetime of transgressions and rule bending.  It even, for the first time, made Kirk accountable for his racism against the Klingon people.  Shatner, a man of unending energy, played this brilliantly, with a very sad look of fatigue and guilt plastered on his face the entire time.

Star Trek VII: Generations is actually one of my favourite films of the franchise, though it’s roundly hated by most.  A low budget tale, hastily thrown together, that is supposed to be the “passing of the torch” from the Kirk gang to the Picard gang, this movie is truly about choices and –again– sacrifices.  Picard sacrifices a life with family for a life of adventure, losing the former most horribly and completely.  Kirk sacrifices his life to save a ship.  Then again he must sacrifice his perfect afterlife to save some more people.  Both captains are shown to be lonely men who must always do the right thing, forever denied a touch of the human happiness to which the rest of us can at least aspire.  This movie is historic, of course, for Kirk’s death which, while angering at first, sits better with me at each reviewing.  This is because Kirk’s death should be pointless and lonely, much like pretty much everyone’s death.  And thats what we get: a great man who always embraced the philsophy that there does not exist a “no win scenario” nonetheless loses in the end, rather anticlimactically.  It’s poetic and, if viewed with all sensors at full sensitivity, has a lasting effect.

Star TrekVIII, IX and X were all flaccid outings by the Next Generation crew.  (Well, VIII was pretty good).  So we won’t talk about those.  But I hope you see what the undercurrent has been throughout all the films: an exploration of priorities, sacrifice and the personal journey of heroism.

That brings us to Star Trek XI, which will no doubt re-ignite the franchise, bringing a whole new generation into the fold, including millions of people who care little for the history and philosophy of the original Trek.

Here’s my problem with the new film: it doesn’t need to be Star Trek.  It could be anhy unnamed, generic space opera.  Good looking people get into shiny ships and blow the frakk out of each other.  Some one-liners pop up, as do some perky boobs, and there you have your MTV generation readily sold.  Why co-opt the legendary name of Trek to make this pablum?

J.J. Abrams was famously never a Star Trek fan.  He has always admitted to being a Star Wars man, and by golly does it show.

In 6 Things That Suck About The New Star Trek Movie, Michael Dance puts it this way:

“In this Star Trek movie, Kirk is basically Luke Skywalker with the charm of Han Solo.  He’s a troubled young farm boy who leaves home at the urging of a wise older man who claims he knew the farm boy’s father.  Sound familiar? How about the early cantina scene featuring a wacky-looking alien and a bar fight?  Or the scene near the end when one character announces the humorously low odds of a plan’s success?  Or the scene where the bad guys blow a planet up? C’mon now.”

Star Wars, while fun, is mindless fantasy.  Trek has always been mindful science fiction.  As Roger Ebert puts it in his review of the film, “..the movie raises its yo-yo finger to the science, while embracing the fiction.”  The only wonder and awe are courtesy of the neato-whiz-bang CGI effects, and not of any interesting plot twists, character moments or profound revelations.  (Compare that to Star Trek I, where there is awe aplenty: at Spock’s turmoil, at the majesty of the innards of V’Ger, at V’Ger’s origins and at Persis Khambatta’s shiny skull.)  I for one would happily give up all of the impressive space battles for a storyline that both intrigued and touched me.  Clearly, though, I’m in the minority of movie-goers.

Plot holes abound.  But that’s okay; it’s to be expected.  But about that plot….

The plot is… well… it’s a plot.  Here it is.  (Remember, spoilers abound).  The old Spock, the one we know and love, is trying to save Romulus in the future.  He fails and ends up going through a black hole into the past, followed by an angry Romulan miner who wants to kill him.  Said miner arrives just in time to kill James Kirk’s father as Kirk himself is being born.  This sets in place a series of time-altering events, which include: Kirk being a bad boy who joins the Federation reluctantly; Spock being Uhura’s teacher and lover; the planet Vulcan being destroyed and its race rendered all but extinct; Kirk promoted from stowaway to first officer, then from cadet to Captain (seriously, WTF?); etc.

So, this is –and never will be– the Trek the rest of us know and love.  It’s an alternate timeline.  The timeline of the original Trek, the Next Generation, Voyager, DS9 and all the movies that have come before have been erased.  They will never happen.  This is not the same as an alternate universe, which coexists with the prime universe and that we can access.  The positing of an altered timeline is that the other stuff never happened and never will happen.  So if any attempt were ever made to access that original timeline in, say, a new TV show or movie, it would feel really quite stupid.

Yes, it’s just a movie.  Yes, it’s a clever plot twist to allow the franchise to be rebooted without having to adhere to any pre-existing canon.  But is this not offensive?  For those of us who loved the legacy of this franchise, who found meaning in some of the stories and who appreciated that an entire expanded universe of 10 movies, six TV series (including the animated one) and a quadrillion books were cleverly folded into a set of established events and canon, this is a bit of a slap in the face.

It also means that the only TV show that still fits into the established canon is the atrocious Star Trek: Enterprise, the crappiest of the lot, and probably J.J. Abrams’s favourite.

So given that the new brash, modern and seemingly anti-cerebral James Kirk will not become the brilliant and smarmy tactician we came to love; and given that Spock will not become the tortured but dignified soul struggling to find a place between his two homes; and given that none of the other characters will become those things we love them for…. why bother having those characters in the first place?  Why not re-boot the franchise with a fresh set of characters unencumbered by history and expectations?

The answer obviously is that these characters have name brand recognition and can sell movie seats.

This seems like a piss poor reason to ass rape one of the Western world’s popular culture treasures.  I do not approve.