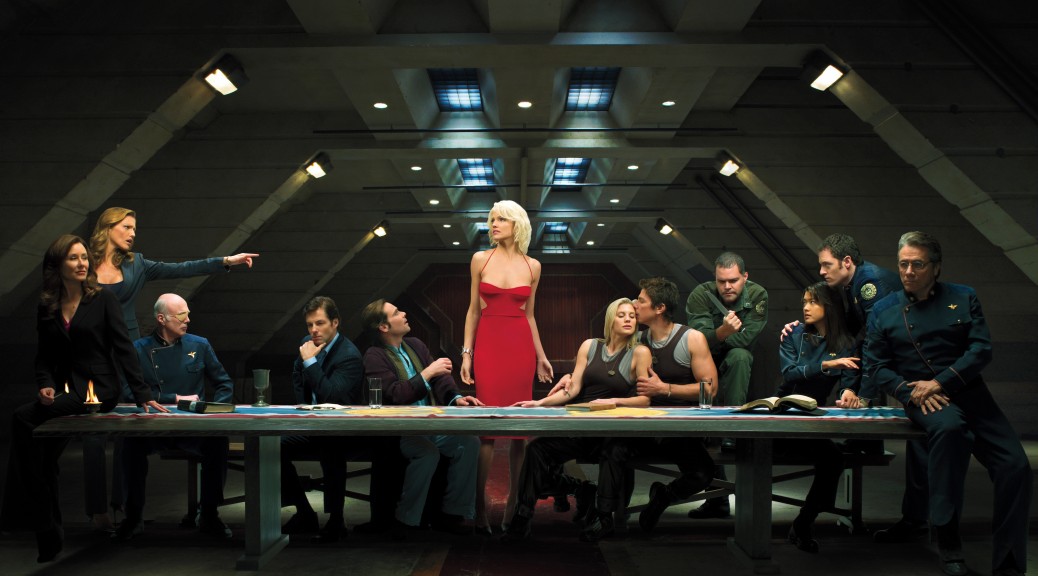 Warning: this article contains many spoilers for the series finale of Battlestar Galactica, titled “Daybreak”

In a few days we, the humble viewers of television, will bear witness to the final few hours of the best science fiction TV show presently on broadcast American television: Lost.  The excitement is palpable.  But, sadly, I am reminded of another much anticipated skiffy finale, not so long ago, that left many people either disappointed or ambiguous.

I’m talking, of course, about the “re-imagined” Battlestar Galactica which, in its heydey, was perhaps the best show on television… in any genre.  It’s an amazing thing that even though BG ended exactly one year ago, no one really talks about it or thinks about it much.  I say “amazing” because its finale, or more accurately the speculation leading up to the finale, was an obsession for fanboys and newbies alike.  (Evidence: my own overly considered cogitations about the nature of the Last Cylon.)

Last year I started to write my review of the finale.  This is what I managed to get down:

Few dramatic TV events have equalled the hullabaloo surrounding the recent airing of the final episode of the reborn Battlestar Galactica.  Homes across the country hosted finale parties.  Bars and theatres offered specials for people attending their establishments to watch the show.  Blogs rang out with the sounds of furious typing with endless theories about what the finale would hold.  The event reminded me of similar historic TV fiction events: the endings of M*A*S*H and Star Trek: The Next Generation come to mind.

That’s it.  Well, with Lost about to end, I figured that this is as good a time as any to revisit TV science fiction’s last most anticipated finale.  And so I did…. while cleaning my condo.  Yes, it was background noise as I scrubbed my bathroom floor.  To be frank, that actually made it all the more interesting.

I’m assuming that anyone who’s reading this has viewed the finale already.  To summarize: there were flashbacks to the main characters’ lives before “the fall”, i.e. before the final war with the Cylons and the destruction of the human colonies.  Then there was a hastily thrown together rescue of the Cylon-human hybrid child Hera, during which many are killed, including the main Cylon villain.  And the episode ended with its most interesting act, the arrival of the human-Cylon fleet to our Earth, 150 thousand years ago.  They interbreed with our pre-verbal hominid ancestors, making us the distant descendants of both extraterrestrial humans and their synthetic creations.  The great value of the machine-child Hera, then, was to become our “Mitochondrial Eve“, the most recent shared ancestor of all extant humans.    In the coda, the so-called “head Baltar” and “head Caprica” are seen in a major contemporary city, I think it’s New York, expressing their concern that we are heading down the same road that caused Kobol, the original Earth, and the Twelve Colonies all to fail.

It’s easy to criticize (and fun, too!)  So let’s get the obvious stuff out of the way first.  Is it really believable that the survivors of the super advanced society would willingly cast aside all their creature comforts to live as hunter-gatherers?  My feeling is that it’s a great experiment until you get a bad cold or diarrhea, then you’ll trade all your idealism for a flush toilet or a temperature-controlled hotel room pretty damn fast.

But I can let that slide.

What’s more irritating is that it’s painfully evident that the show’s many mysteries, twists, turns and allusions were thrown in over its five seasons with little regard for an outcome.  It’s something a writer for World Wrestling Entertainment would do: create a conflict and characters and have faith that you’ll figure out how to end it when the time is right.  That sure didn’t work for The X-Files, which built up so much random, pointless mystery that its finale was a hastily assembled “court case” that attempted to bring all the internally inconsistent plot threads together into some sort of sensible narrative.

Examples of this phenomenon in “Daybreak” are many.  For example, for the duration of the series, the Cylons had resurrection technology, but were seeking something higher, something more mysterious, from their conflict with the humans.  In the end, it seems that all they were content to have was… resurrection technology?  Yes, yes, I know that this was after their Oedipal struggles with the “Final Five” Cylons led to them losing that technology, but…. seriously?  Then there were the endless teasers of main characters having a shared hallucination of exploring a glorious opera house, a clear metaphor for a symphony of well-constructed, complicated intent.  In the end, their visions were just premonitions of running through a Cylon ship, chasing a child who was running in the right direction anyway.

(And frankly, why was Hera running in the first place?  She spent the first half of the episode crying for her Mommy.  When Mommy arrived and rescued her, Hera’s only act was to run far away from said Mommy.  Again: seriously?)

The final season of BG had at its heart several mysteries, among them, what or who was the new Starbuck, and what was the relevance and origin of the creepy music that her father had played for her as a child, that Hera now transcribed into meaningful visuals, and that now summoned the awakening of the original Final Five Cylons.  For those who haven’t figured it out yet, the music is just a re-worked version of Bob Dylan’s “All Along The Watchtower“, made famous by Jimi Hendrix.   The allusions to the song are trite and precious.  While entering the destination coordinates suggested to her by the music, Starbuck even mutters, “There must be some kind of way out of here.”  I didn’t catch it the first time.  But, on my knees scrubbing the bathroom floor, I felt my eyes roll.  I don’t need cheese with my science fiction, thank you.

So the plotting was clumsy and disappointing.  Many of the fanboys have oozed lovingly about how impressive the special effects were in the finale.  I don’t care about that.  When we re-watch this in a year, those effects will appear pedestrian or worse.  But there was one saving grace to the episode that, I think, rescues both it and the series.  And that saving grace was Gaius Baltar.

I recall reading an interview with show-runner Ronald Moore, who said two important things.  One was that he was worried about finding an appropriate ending to the show until it dawned on him that it was all about the characters; if he was good to the characters, then the ending would find its own way.  I’m not sure that that’s entirely true, but whatever.  The second important comment was that he had always felt that the most important character was Gaius Baltar.

Every epic, arc-based television show suffers from a need to spread its focus across an ensemble cast.  But even when the story is vast and deep, ultimately the narrative is subtly driven by the fragilities and personal arc of a single, key character.  And that character is often not the main protagonist.   In Buffy The Vampire Slayer, I would argue that the arcs of Willow and Xander tell the complete story of the series much better than do the heroics of Buffy, the titular star.  And Babylon 5, the ground-breaking space opera to which all these Johnny-come-latelies (BG, Lost, Fringe, etc) owe homage, was essentially about the personal and political journey of Londo Mollari, who was a secondary character at best.

In BG, the key was always Gaius Baltar.  It helps that Baltar was also my favourite character.   And not just because he was a short scientist who got it on with taller supermodels.  Yes, he was whiny, self-serving and sometimes duplicitous.  But the actions for which he was vilified on the show, even facing a war crimes trial, were in fact proper, expected and natural actions that any average person would have done.  In real life terms, Baltar never did anything truly villainous.  Cowardly, perhaps.  But in real life, true courage is a rare thing.

It was Baltar who first found love with a Cylon.  It was Baltar who had the fewest prejudices and who held his vulnerabilities proudly before him.  The writers worked hard to present him as a fragile, shallow person.  But he never came across as such.  Instead, he was always the one person who seemed to understand the gravity and implications of all that happened around him.  I actually cheered aloud during the episode when Baltar figuratively bitch-slapped the annoying, haughty President Roslin, whose unaddressed hypocrisy was always a sign of a much deeper arrogance than that for which Baltar was oft accused.

On the destroyed bridge of the Galactica, as the head bad-guy holds a gun to the head of young Hera, and all the haughty plans of the President and the Admiral seem to be unraveling, it’s Gaius Baltar who saves the day, not through guns or firsts or blind bluster, as the more heroic main characters –Adama, Starbuck, Roslin, etc– would have done, but rather through words.  In that ravaged room, he delivers the most important speech in the series, the phrases that, to some extent at least, pull together all the dangling threads of narrative.  He tells of his journey from avowed atheist to believing that something else was at work in that room, but with a casual profundity that betrayed the authenticity of his feeling.

And it was Baltar again who, on the surface of the “real” Earth, briefly broke into tears as his personal arc was recapitulated in the grander arc for humanity: from farmer to sophisticated citizen of a multiplanetary civilization, back to subsistence farmer in a hunter-gatherer society.  It was all about Baltar.  It was always all about Baltar.

So what’s the verdict?  As an episode that answered all the mysteries too generously spread throughout the series, “Daybreak” was a failure.  But the mature viewer must take a step back and accept that finales should not be about resolving mysteries, or even about concluding character story arcs.  Rather, as works of art, perhaps their intent should more appropriately be to mold meaning from the shared experiences of both performers and audience.  Was there meaning in “Daybreak”?  There was certainly a message, however clumsily delivered.

But the message is irrelevant.  The greater question is, after each viewing, does the episode fill one with contemplative stillness?  On my hands and knees, inhaling cleaning fumes, it’s hard to say.  But yes.  I think yes.