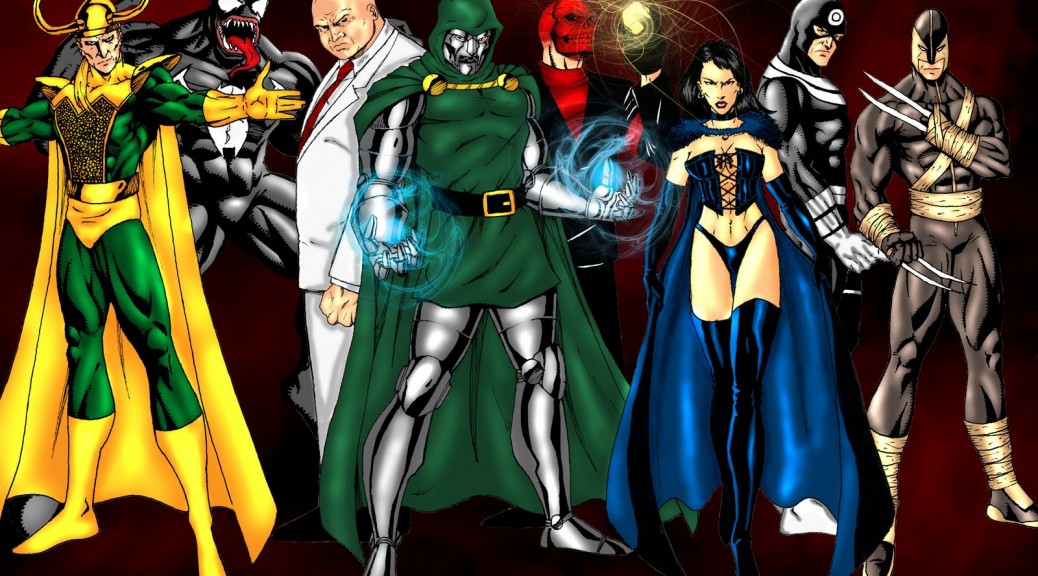 A lot of people like to add “traditional” super hero comic books to the category of science fiction.  On its face, that seems reasonable, since there’s a strong speculative science aspect to much of comics heritage: Superman is an alien, Spider-man is a teen genius scientist, etc.

I tend not to conflate the two.  The science fiction in comic books is often a convenient storytelling trope that is not essential to the narrative.  Thus, by my definition, it does not qualify as true SF.

However, today I will suspend my strictness and write a bit about comic books.  This is mostly because I’ve spent the last month inhaling a score of Ultimate X-Men comic books.  And I’m a longtime Avengers geek.

So this post is all about who I consider to be the best villains in the mainstream comic book universe.  I say “mainstream” because, frankly, the comic book world is a deep and complex labyrinth with many nooks of extreme and arcane nerdliness.  If I were to include some of the less well known titles, like Spawn and Hellboy, then the devil himself would qualify as a villain, and we can’t be having that.

What do I consider to be a good villain?  I think there’s something to be said for a classical approach, wherein a villain is a tragic figure, someone who could have been a hero if it were not for a tragic flaw or an unfortunate circumstance.  Indeed, one of the truly terrifying aspects of a villain is how much he (or she) dwells within in each of us.  A hero is often an unattainable ideal, but a villain is Everyman pushed a little too far.

I particularly like villains who, if viewed a tad askew, are in fact the heroes.  The demise of a great villain should be a reason for both celebration and a touch of sadness and regret, for appreciation for what could have been.

When the hero (Superman) is essentially a god, indestructible, perfectly honourable and virtuous, who shall his foil be?  A mad man intent on world domination?  A super-powered miscreant?  A dumb brute focused on destruction?  Or, more subtly, a businessman with a complicated agenda?

Most depictions of Luthor are of course the latter.  What I like about Luthor is, firstly, that he has no special powers.  He is just a man, though a brilliant one, unencumbered by the burden of morality.  More importantly, at a certain level, Luthor is right.

Superman, as much as we love him, is a fascistic figure.  He could crush us or rule us at his pleasure.  To his credit, he chooses instead to enforce our own laws on our behalf.  But the prospect and potential for his tyranny is real.  In the real world, we would each pray for the rise of a Lex Luthor, a mere mortal who holds the key to keeping the unfettered godling at bay.

Where to begin?  Joker’s motivations are mysterious.  He doesn’t care about money or power or any of the traditional factors that compel a villain.  We don’t understand him.  He seems to seek only chaos.  He has no super powers, no advanced technology, just a bizarre personality, an unimpeachable will and a frustrating incomprehensibility.  To heroes, all of whom are seated in order and understanding, the prospect of chaos truly is horrifying.

To me, the scene in The Dark Knight Returns, in which Joker breaks his own neck to frame Batman, is emblematic of the character.   Unpredictable, violent, remorseless, without ego or emotional vulnerability, Joker is the ultimate untouchable terror.

And here is the king.  Since earliest childhood, Magneto has been my favourite comic character, heroic or villainous.  A survivor of the Nazi holocaust, a troubled soul seeking only justice for “his people”, Magneto is a misguided yet charismatic man of both great power and great honour.  His anger and villainy arise from righteous pain.

We cannot hate him outright, for the injustices he has endured, and for the truth of his campaign.  His foes, the heroes, the X-men, are the naive ones who blindly try to forge a peace between we meek humans and the undeniably superior mutant race.  The thoughtful reader knows, at a certain level, that Magneto is correct, that men and mutants must eventually come into conflict.

Yet he is the villain, for he opposes us.

His tragic history, his awesome power, his cult of personality, and the manner in which we must hesitatingly admit to the righteousness of his campaign, all make Magneto the greatest and best of the comic book villains.