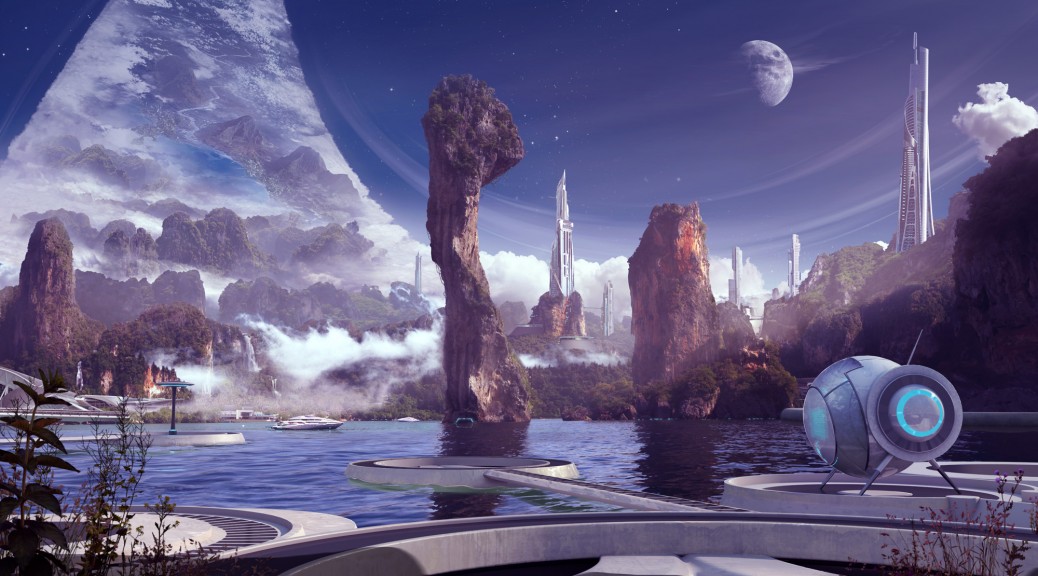 This article is a mostly spoiler-free discussion of Larry Niven’s original Ringworld books. For a review of Fate of Worlds: Return From The Ringworld, follow the link.

For about four months now, I’ve been reading for pleasure…. again.  It’s been a long time.  So much of my reading time is consumed with technical documents and news (and Facebook), that finding a few free hours per week just for fun reading has been difficult.  So I got a tablet computer specifically to make reading more convenient.  And in the past 3 weeks, I’ve read five novels.  It’s a full on addiction, and other things on my to-do list have suffered.

As I’ve mentioned before, I’ve decided to re-read some of the science fiction classics from my youth.  The most recent target of this project was Larry Niven’s classic Ringworld series: Ringworld (1970), Ringworld Engineers (1979), Ringworld Throne (1996), and Ringworld’s Children (2004).

The Ringworld was one of science fiction’s biggest ideas.  It’s a kind of modified Dyson Sphere.  Imagine all the planets, asteroids, and comets in a solar system being collected and re-created into a ribbon encircling the sun.  On the inside surface of that ribbon would be a stupendous amount of living space, collecting a substantial fraction of the sun’s energy output.  The land area of the ringworld would be equivalent to millions of Earths.  Someone once suggested the following visual aid: if the Earth were a marble, then the Ringworld would be a five foot high ribbon about half a mile in length.

It’s a mind-boggling idea.  If you stand on the surface of the Ringworld and look up, you would see the arches extending all the way behind the sun.  With a telescope, you can observe the goings on of the rest of your world, and there would never be absolute night, as the sun would always be at the noon position, and the arches would always reflect back sunlight.

For a sense of its scale, check out this fan-made Youtube video of the Ringworld’s scope.

The technical details of the Ringworld are legendary.  Technical papers have been written about it, and physics conference presentations dedicated to it. (See graph below). Implicit instabilities led to Niven having to write the inevitable sequel to explain how those instabilities are accounted for.

But therein lies the problem with the Ringworld.  It is the ultimate science fiction setting for a million possible stories.  Yet, after the first two novels, Niven chooses to tell fairly straightforward tales about quests to conquer or save the Ringworld, mostly ignoring the rich tapestry of complex societies and ecologies living upon the Ringworld itself.

I’ve said it before: Larry Niven is an incredibly talented storyteller, but a crappy writer.  And yet I remain a lifelong fanboy.  One of the jewels of my collection is a copy of A Gift From Earth, which I bought at a convention just so Niven could sign it. So don’t think for a second that my admission of his poor skills has any bearing on my long term affection for his works.

Here’s the problem with Niven.  He’s a mathematician.  He writes a bit like a mathematician.  Everyone behaves logically.  Characters often deduce likely outcomes of largely speculative actions through thought processes resembling mathematical proofs.  Emotions are treated as childish predilections.  And dialogue is repetitive and lacking nuance.

One thing I was unable to appreciate when first reading these books as a teenager is that Niven is wholly incapable of writing female characters or believable interactions between men and women.  All such relationships are necessarily sexual, and all women seem to react like teenage girls.

I literally cringed while re-reading some Niven dialogue. Many characters use the same unusual words which, if attributed to just one character, might serve to help round out that person’s unique attributes.  But instead, unless we’re dealing with distinctly separate sentient species or genders, all characters tend to be indistinguishable from one another.  One such word is “arcology”, which I had to look up, but which everyone in the Niven universe seems to use in every third paragraph.

Another strange Niven habit is the phrase, “sanity check.”  Several characters frequently ask for a “sanity check” as they describe their theory of events.  It is beyond annoying.

One reassuring characterization was the initial depiction of our hero, Louis Wu.  Louis is 200 years old, a xenophile, lover, and adventurer.  It was impressive that Niven made it a point to say that in Louis’s two centuries of life, he had never been a soldier.  It was a grand departure from the archetype SF hero of the day.  Louis’s bravey then, in the face of violence, was genuinely heroic.

And yet, by the second book, Louis Wu was a martial arts expert with weapons training and the ability to plan military-style manoeuvres and ambushes.  The cliche was disappointing.

There are many things wrong with the Ringworld books, mostly having to do with Niven’s poor characterization, dialogue and pacing skills.  However, the grandeur of the stories more than make up for these shortfalls.  Niven’s “Known Space” universe is rich and fascinating. His imagination is simultaneously humbling and inspiring.  If you’re the kind of gee-whiz geek who likes his speculative universe to have been well constructed upon a bedrock of plausible physics, then Niven is your man.

I’m presently reading the Fleet of Worlds series, which ends (I’m told) with the final chapter of the Ringworld story.  These books are co-written with Edward M. Lerner who is, frankly, a better writer than Niven.  The combination is an impressive one, with Lerner’s mature characterization and Niven’s fascinating vision.  Review pending 🙂

I leave you with this lovely computer generation of the scene in which our intrepid explorers first arrive at the Ringworld:

5 thoughts on “Return to the Ringworld”