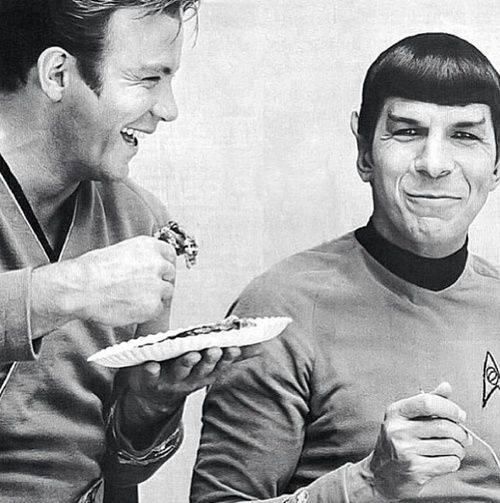 Yesterday afternoon, I was sitting in  Fran’s restaurant on Shuter Street in Toronto, with my two good friends Ed Wong and Andrew Currie.  I noticed a strange art piece –sculpture, I guess– on the wall. It reminded me of something.

Knowing that (Special) Ed would not disappoint me, I asked him, ‘What does that look like?”

Without skipping a beat, he responded, “The Teacher.”

I was duly impressed. His highly attuned geek mind had drawn the correct connection to the classic Star Trek episode, “Spock’s Brain“, in which a device, called The Teacher, gives its wearer advanced technological knowledge, sufficient to have allowed aliens to surgically remove Mr Spock’s brain, and subsequently allowed Dr McCoy to replace said brain:

Seconds later, my friend Melanie alerted me on Facebook to the fact that Leonard Nimoy had just died.

I’ve never met Leonard Nimoy, not really, not one-on-one.  But about thirteen years ago, he spoke to a small group of us in Washington, DC, about his new book of photography about the Jewish female essence, called “Shekhina“. Some of these photos are on display at the Michelson gallery.

I was not particularly impressed by his artwork. And frankly, no one present was there to hear him talk about photography… and he knew that. He satisfied our nerdly needs by telling many Star Trek stories, including the oft-repeated tale of how he “invented” the Vulcan salute (by observing rabbis in the Synagogue).

There is much I could and want to say about Leonard Nimoy and his importance to the evolution of both science fiction and the acceptance of those of us who enjoy science fiction. But almost all of it is being said by more eloquent folks.

I do want to point out, though, that Nimoy’s journey toward finally accepting his icon status was a rocky one. His famous 1979 book, “I Am Not Spock“, famously argued that he should be accepted as a multifaceted artist in his own right, and not be pigeon-holed into the one role for which most of the world knows him.

But his 1995 follow-up, “I Am Spock”, showed a matured acceptance of his role in popular culture, giving us a taste of the generous senior he had become, one who happily shares and re-shares familiar tales of the good old geek days of yore.

When Gene Roddenberry was famously given an unprecedented opportunity to produce a second pilot for Star Trek, after the first, “The Cage“, was deemed too cerebral for TV executives of the day, he was given a choice. He could either keep his strong female second in command (played by his wife, Majel Barret) or the green-skinned alien, Mr Spock. He could not have both.

He chose Spock, of course, changing the character slightly to adopt many of the characteristics of Barret’s “Number One”: the command responsibilities, the cold lack of emotion, and the reliance on fact and observation over instinct.

While it was an infuriating Sophie’s Choice, it was nevertheless the right call: Roddenberry reasoned that a science fiction show needed a constant reminder of its spacey premise, and nothing did that better than an actual alien face in almost every scene. Since then, of course, the character of Mr Spock has pretty much become the recognizable face of the entire Star Trek franchise, despite Shatner’s Kirk being the true star of the original show.

Nothing signaled Spock’s ascendance over Kirk more than a scene in the DS9 episode, “Trials and Tribble-ations“, in which Jadzia Dax quips to Sisko, “He’s so much more handsome in person.” Everyone, Sisko included, assumed she’s talking about the lady’s man, Kirk. But no, Spock is the one who caught her eye. Just like he caught the unblinking eye of pop culture decades ago.

On a personal note, Nimoy’s Spock was an important representation of power, masculinity, sensitivity and sexuality for we of the early nerd generation, who sought role models relective of our skills and values. Spock was, above all else, a man of intellect. But his “cold” reliance on reason never compromised his ethics. Rather, he consistently demonstrated that logic and reason were the bedrock of ethical behaviour, whereas emotion and spontaneity were paths toward regrettable ill deeds.

Despite his intellectualism and pacifism, he was a physically dynamic presence. He was the strongest member of the crew, but was loathe to demonstrate his superiority. He was also, as Jadzia Dax observed, handsome and sensual, though quite unaware of it.

In other words, Mr Spock was everything that a diminutive book-smart nerdy kid wished to see in himself. Is it any wonder that the character struck such a resounding chord amongst many generations of dispossessed and marginalized science fiction fans?

I choose to remember Nimoy/Spock as the subject of countless meta-art projects, like this mash-up of homoerotic Star Trek scenes, set to the tune of Nine Inch Nails’ “Closer”:

I realize that Nimoy is not Spock. But unless you knew the man personally, it is impossible to disentangle the legacy of the actor from the importance of the character he brought to life. I will not make the obvious coy observation, that Leonard Nimoy lived a “long and prosperous life”. But he did. He received recognition in his time. Thus, I do not mourn him, but celebrate his life and his gift to science fiction.

I will leave you with this forgotten gem: Leonard Nimoy singing The Ballad of Bilbo Baggins…