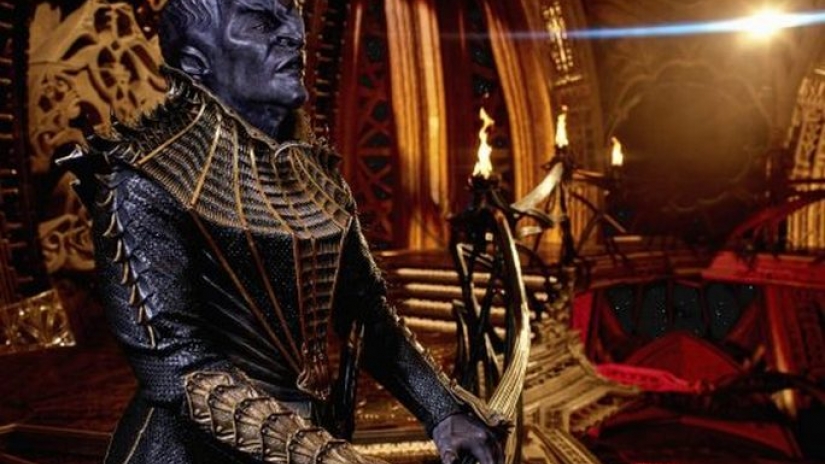 Star Trek, the original series, recently celebrated its 50th birthday.  Star Trek: The Next Generation, is about to celebrate its 30th birthday.  In fact, a review of its pilot episode was my very first newspaper article. I was a really bad writer back then, and an even worse reviewer.  (Some say I never improved.) I predicted that the show would not last. Clearly, I’m an idiot. In my defence, I was 20 years old. Most people are idiots at 20.

In honour of those heady days of bad writing and worse reviewing, I’m diving back into the murky deep end with a poorly-written review of the latest Star Trek TV show, Star Trek: Discovery. I have to say, my expectations were low, given that this show was rumoured to have been hastily thrown together for the sole purpose of selling the new CBS All Access app. And yet another prequel?  No one ever asks for a prequel. No one.

At this point, I have seen seven of the eight scripted episodes of the first season.  Let’s break it down… I like the new Klingons. Wait, wait, hear me out.  Yes, they don’t look like the old Klingons. But the old Klingons were the new Klingons in 1979, and we got used to them. Plus, let’s be honest. ST:TNG and ST:DS9 pretty much neutered the Klingons into a one-note caricature of a species for whom everything had to be honourable and angry except when the plot called for them to be otherwise.

The new Klingons look alien, scary, and have intention. I particularly enjoyed the staccato speech delivery of their leader T’Kuvma. He was a new kind of Messianic Klingon, with a well written substance that transcends how Klingon leaders have been portrayed in the past.

The new Klingon outfits look exotic, proud, luxurious, and frightening. These are a complex and beautifully ugly foe to whom one does not wish to lose.

As well, it was bone-chilling (pun intended) how they casually ate Michelle Yeoh’s corpse.

The sociopathic Captain Lorca has my attention.  I am, shall we say, concerned about the depiction of such an unstable individual in a position of power in Gene Roddenberry’s utopia. But I find him fascinating so far. Frankly, he should be the star of the show, and I suspect he may ascend to that role if the show makes it to a second and third season. He is far more interesting than the nominal protagonist.

The visuals are acceptable. I don’t watch a show for its action or special effects, but for its story. They do seem to love the J.J. Abrams style of Trek filmmaking which, frankly, makes me mildly nauseated.

You know how I said I really liked Michelle Yeoh and T’Kuvma?  Well they’re both killed in the first episode. So there’s that.

I am on record of not liking J.J. Abrams’ Star Trek universe, known to geeks as the Kelvin timeline. (Though I didn’t mind Star Trek Beyond). To my knowledge, the producers have not confirmed timeline in which ST:D is set. However, given that Kirk would be in his late teens or early 20s at this point in the arc, it stands to reason that we are knee deep in Kelvin.  And really, who needs that?

Let’s get this out of the way. The lead character, Michael Burnham, was written for Rosario Dawson, rumour has it. So Sonequa Martin-Green has to interpret a role that was not written for her. I get it; it’s a tough gig. And she does it well.

The problem is that Michael Burnham is an unlikable protagonist. She makes poor decisions, does not seem to know how to make human relationships, and always has the same caffeinated budgie look on her face: 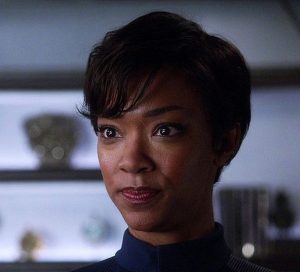 Her backstory is at best incomplete and at worse contrived. For an unclear reason, she was a human raised on Vulcan by…. duh duh duhnnn… Spock’s father! Why? Why is it necessary to drag poor Spock into this except as a marketing ploy to show people marginally aware of Trek lore that this franchise is part of the canon? This bit of character history just serves to complicate the grander continuity of the Trek timeline.

And she’s a woman named Michael. Okay, we live in a time when names don’t have to be gendered. I get that. But a character on the show actually comments something to the effect that, “the only woman named Michael I’ve ever heard of was the mutineer Michael Burnham!”

So when will be get an explanation of why she’s a woman with a man’s name? And how much do you want to bet it’s because of something lame and predictable, like the Vulcans needing to name her, and choosing an Earth name at random?

This is an arc-based series, meaning that every episode is a chapter in a larger story. This is the norm now in television, especially for science fiction. But Star Trek was always episodic, not arc-driven. This is a very small criticism, since episodic television feels anachronistic now (see The Orville). But it’s still a tad off-putting.

Some critics have pointed out that the technology on ST:D is far too advanced for the show to serve as a prequel to the original series. (It’s supposed to take place a decade before the adventures of Kirk and Spock). This doesn’t bother me. Sometimes visual consistency and continuity have to give way to the realities of storytelling. The only reason Kirk and Spock didn’t have the gee-whiz gizmos that Michael Burnham has access to is that in the 1960s we never imagined holographic simulations or “spore drive”.

Speaking of “spore drive”, or whatever it’s called…. what the frack. This bit of technology is at the heart of the arc’s drama. The USS Discovery is the only ship that has the experimental drive, which allows near instantaneous travel along something called the “mycelium network.”

WTF?  Mycelium is the vegetable part of a fungus. So apparently there’s supposed to be a galactic network of fungus that permits instantaneous travel. At least that’s what I’m getting. Does it matter? Why not. Sure.

But that brings us to….

(Get it? The Ferengi? Instead of The Ugly? Anyone? Anyone? Bueller? Anyone?

…okay, so if the spore drive is the Federation’s secret weapon, why isn’t the USS Discovery sent back to Utopia Planitia post-haste so that all the ships can benefit from Discovery’s magic?  Oh? Is it because when the Discovery is inevitably destroyed before the end of this series, we will have a reason for the spore drive’s absence from future incarnations of Trek?  Clumsy writing.

The very premise for Burnham’s story arc is that she has been sentenced to life imprisonment for mutiny, and is colloquially blamed for starting the war with the Klingons. But none of that tracks.

Yes, she committed mutiny, though there were mitigating circumstances. Long time viewers of Trek will know that every series features one or two mutinies per season; no one ever gets prosecuted.

More importantly, the Klingons fired first and initiated the war. How is it that Burnham is blamed for starting the war? This is never explained or addressed. More clumsy writing?

But my biggest complaint with ST:D is that it does not hold true to Roddenberry’s vision of a Utopian future when human beings are peaceable, philosophical, rational, and not prone to prejudice. Quite the contrary, these characters are bigoted, emotional, and often cruel. I do not feel inspired by any of them, and I do not aspire to live in their world.

This is what I asked myself: if this were not a Star Trek show, would I watch it? The answer is a very strong yes. The acting, production value, and what passes for a story arc are of acceptable quality.

As a Trek show, it is weak on intellectual substance and likability. But I would still watch it, mostly because of two reasons: (1) I like Captain Lorca and want to see what befalls him; and (2) I think/hope/pray the writers have a big payoff for the wacky spore-drive and Klingon uprising story.

4 thoughts on “Star Trek Discovery: the Good, the Bad, and the Ferengi”