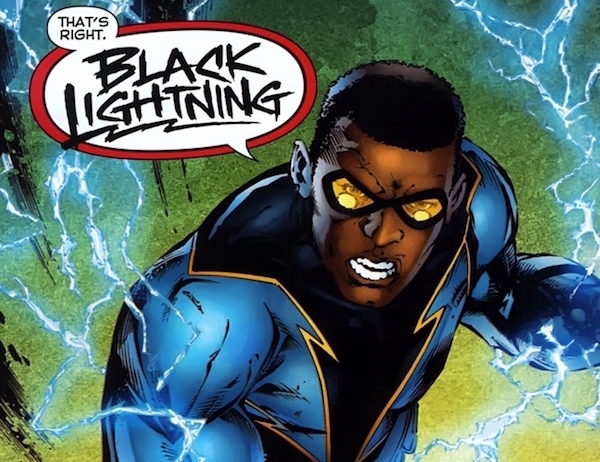 If you haven’t been keeping score, there’s a new entry into the DC comics’ TV shows on the CW network. Joining Arrow, The Flash, DC’s Legends of Tomorrow, and Supergirl comes another Greg Berlanti production… Black Lightning.

This TV adaptation of a classic minor comic book character features Cress Williams as the titular reluctant hero, now retired and serving his beleaguered community as a high school principal while raising his daughters (who will soon become the heroines “Thunder” and “Lightning”) and attempting to salvage his broken marriage.

I’m three episodes in. So here are some very brief observations.

Cress Williams is great and looks great. But that costume is just RIDICULOUS and risible.

This is an obvious criticism, but aren’t we past the point where Black heroes have to have the word “Black” in their names?

Because this is the CW, most conflict is still generated by characters unnecessarily withholding information from one another. This isn’t quite as bad as in, say, Arrow. But it is still present and annoying. This is something of a CW signature, but it is annoying. It’s as if they learned the wrong lesson from the glory that was Buffy The Vampire Slayer: Buffy had secrets and angst, yes, but the conflict she experienced externally was reflective of her inner conflicts. In CW shows, conflicts are rarely internal but generated by characters in loving relationships being pointlessly deceptive, and then trying to rationalize that shittiness as representative of some unconvincing inner conflict. Black Lightning does this less frequently than do other shows in the Berlanti-verse; but it’s still there.

I love that the hero is a middle aged man with all the problems that beset middle aged men like me. It’s more impressive that he beats up thugs then goes home to rehab his bad back and deal with his teenage daughter’s issues. This is a nice change from typical CW fare, which has traditionally relied upon the annoying issues facing impossibly good-looking young people.

I like that they take the time to explain why no one recognizes that the dude with the skinny little mask is actually the local high school principal: because, apparently, when you look at Black Lightning’s face, it’s like “looking into a spotlight.” Cool.

Black Lightning’s love interest is his ex-wife whom he is trying to woo back into his life. That is very cool and holds with the show’s larger theme of preserving family and community.

It is surprisingly a pretty good show —so far. Give it a shot.