Europa Report was a mid-budget fairly hard science fiction film that came out in 2013.  I had watched it immediately, and something about it had rubbed me the wrong way. I definitely recall starting to write a full review. But it seems that memory is a delusion: I had written no such review.

So today, while missing the preliminary fights of UFC228, I decided to give Europa Report another go. And, frankly, I’m not sure what rigid object was rendered immobile in my rectal passage five years ago, because this is a fine, small film rife with imagination and ambition.

The premise is straightforward: a private venture has sent humanity’s first crewed mission beyond low Earth orbit since the Apollo missions, with the destination being Jupiter’s seductive moon Europa.  True space fans will know that Europa is an ice world whose exposure to Jupiter’s radiation and gravitational stress has produced a liquid subsurface that is likely water. Scientists therefore believe that if life exists elsewhere in our solar system, it likely exists in the oceans of Europa, beneath its surface ice. 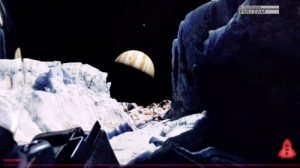 The film begins with an admission that a tragedy has taken place: the crew of the ship never returned. It is later revealed that data was retrieved from the mission’s last transmissions, and the crew’s fate can now be assembled. The movie is therefore a pastiche of faux “found footage” from the mission and documentary-style interviews with the administrators and scientists left on Earth.

What annoyed me when I first watched this movie five years was two things. First, I felt a crew of geniuses selected for their psychological resilience would not behave as dickishly as I felt they were behaving. And second, I found the vague semi-scientific proclamations of all involved to be distractingly unrealistic.

For example, early in the film, one of the chief narrators, an Earth-bound administrator states, “An unmanned mission wasn’t going to cut it. You put men and women into space because they have strength in the face of cosmic odds.” And that is the only justification given for why this is a crewed mission, when every instinct cries out for a robotic probe to have been sent first. For a film that relies on its feeling of authenticity and plausibility, this struck me as a dilute justification for such risk and expense. what exactly can a human crew do in this scenario that a robot could not? Especially if all it seems they are doing is dipping a probe into the Europan ocean. 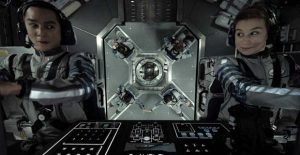 The crew manages to land on the surface of Europa, where one of the scientists states, “with our current position on the ice, we won’t get key data.” After two viewings, I’m still not clear on what “key data” they are seeking. In any other type of film, such data would be a macguffin meant only to move the narrative. But, again, for a faux documentary relying on perceived plausibility, it is essential that the audience buy into the actual science.

An example of how the film gets the scientific complexity right is when the landing craft misses its target, and an astronaut proclaims that they had “landed on a bed of ice 11”. Ice 11 is a real thing, pretty much known only to real physicists and fans of Kurt Vonnegut.

What I had foolishly missed during my first viewing was the sheer ambition of the project and how it managed to sustain a realistic feel on both the spaceship and on the surface of Europa, with just a handful of actors, two or three sets, and a piddling budget. It was all so…. plausible.

The spaceship exterior and interior looked very much how I imagine a real contemporary interplanetary craft would look. And the surface of Europa was simply, staggeringly, sublimely beautiful in its immobile alien desolation. The sense of otherness, remoteness, and all pervasive dark danger was almost tangible.

If this film were made today, with improvements in CGI and the shortened attention spans of audiences, I fear it would look too crisp, too futuristic, less real.

Much has been made of the final moments of the film, which I will not spoil for you. It’s where we move from faux science documentary squarely into the realm of speculative science fiction. Upon my first viewing, that final scene is critical. I would have felt cheated without it. But upon second viewing, I feel I still would have appreciated the thrust, execution and feel of the movie even without the grand final pay-off. I’m not sure why; maybe I’m fed up with the current era of special effects expositions so common in the current slew of superhero movies.

All of this is to say that if you, like me, are a fan of realistic, contemporary space exploration fiction painstakingly set within the limits and context of known facts and physics, I feel you will enjoy Europa Report. Give it a go.