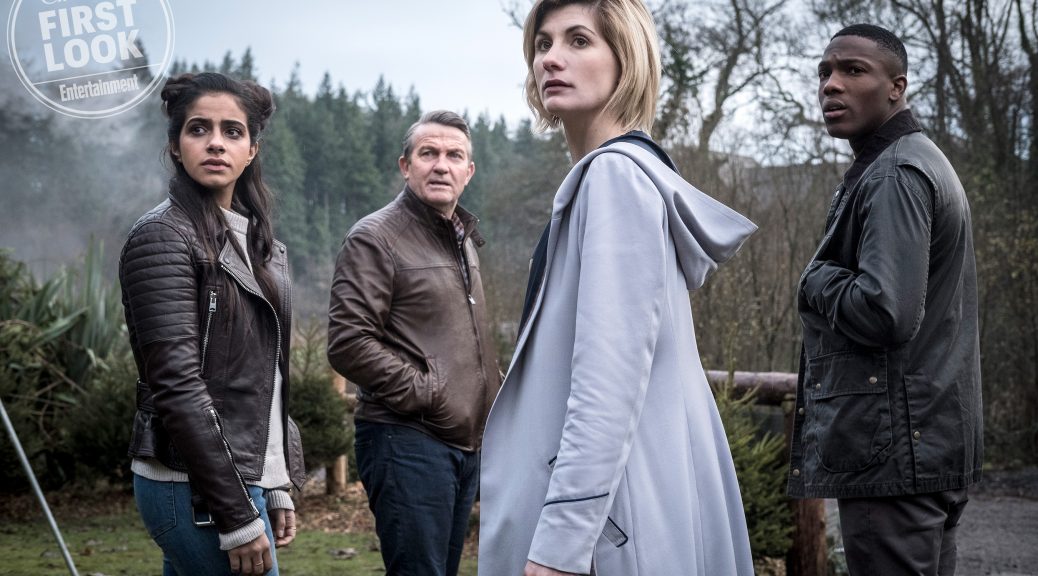 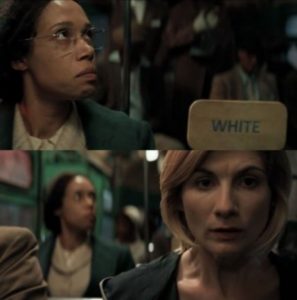 Oh fucking hell. I love the new Who. I just fucking love it. And this surprises me greatly.

I have stated several times in this space that The Doctor is likely the most important character in science fiction television history. I mostly stand by that claim, though his (her) relevance has certainly been diluted of late.

So count me among those who were not looking forward to the new incarnation of The Doctor, the one played by Jodi Whittaker, the first woman to play the role. My trepidation had nothing to do with who plays The Doctor.  Frankly, I stopped caring about that a couple of regenerations ago, as the storytelling just got lamer and lazier.

I was an old school Whovian, complete with the Tom Baker scarf. What pre-teen dork isn’t? It’s sort of required, along with a forced familiarity with various Monty Python skits and a copy of the Feinmann Lectures.  So when Nu Who was launched, with Eccleston at the helm, I was mildly disappointed that it did not have the look and feel of the oldies, but was sufficiently entertained nonetheless.

When David Tenant ascended to the role, though, I felt the show had finally reached a proper pace; and it became must-see viewing, the stuff of the mythical water cooler conversation. (I would now rank Tenant as my second favourite Doctor, after Peter Davison… who is, ironically, Tenant’s father-in-law.)

But by the time Matt Smith took on the role, the stories had become…. tiresome. Too many episodes relied upon pointless technobabble and deus ex machina extractions, all mostly forgiven because of very good acting and curious characters. Too many times, The Doctor got out of seemingly intractable scrapes with a good speech, or by breaking a time travel rule he had just claimed was unbreakable.  You know…. bad writing.

So when Peter Capaldi became The Doctor, I was pretty much through. This was despite the fact that I felt Capaldi was the finest actor to portray the ageless time god. He brought love, life, and gusto the role. The problem, though, was that I did not care about the stories that were written for him.  I was forcing myself to watch every week. The companions in particular were over-written, with forced quirkiness and laboured back stories. I could do with about 30% less focus on Clara especially.

While the Capaldi stories had excellent premises —the Cybermen co-opting the afterlife? A spaceship in which time travels at different rates at different ends?  Fascinating!– they had piss poor resolutions that begged you not to examine them too closely, lest their threadbare assembly become evident.

And thus I made the very easy decision to give up on Doctor Who for good. I didn’t really care that a new actor –Whittaker– had been announced. I feared it would be more of the same: poorly imagined sets, risible villains, laboured cartoonish dialogue, and unrealized potential.

But I had to give it a look, yes?  The historic importance of a female Doctor mandated at least a look, right? So here we are, three episodes into Whittaker’s run, and I am pleased to be profoundly wrong about my expectations.  Whittaker’s first episode, while not remarkable, stands out well for three reasons: the tone, the companions, and stakes.

Much has been written of how some American viewers could not understand the Yorkshire accents of many of the actors in these new episodes. That’s part of the tone that appeals to me. It’s less packaged, less BBC, less Mary Poppins-style Englishness, and more working class, more soccer hooligan. The music is cool, distant, and dark, not fun and childish. The sets and lighting are literally dark. And… and… and… a good, likable character actually dies!  Yikes.

Every Doctor is judged by his (her) companions. Traditionally, they asked dumb questions and got into stupid trouble so The Doctor could explain things to the viewer and have an excuse to be heroic. I am fascinated by the current raft of companions: a retired old bus driver, a young Black man who has coordination problems, and a young South Asian woman who is a new police officer.  Their banter is real, their perspectives believable and engaging, and their heroism is real heroism, not mere science fiction artifice.

And then there are the stakes. Yes, someone actually dies in the opening episode, an older woman who is loved by the other companions. Irreversible, heart breaking death is now a possibility in Doctor Who, in keeping with its new meaty, sweaty, working class tone.

That brings us to the third episode, Rosa, which is a kind of masterpiece by Doctor Who standards.  It’s not quite up there with Blink or Midnight, the standouts of the Tenant era. But Rosa is something else, something that is impactful in a different way: it’s genuinely emotional without being manipulative.

But Rosa‘s greatness is in its blunt hammering of history to an audience increasingly allergic to book learning. It’s the story of The Doctor and her companions trying to make sure that Rosa Parks is placed in the right circumstances to make her famous stand, which triggers the US civil rights movement.

Doctor Who has often hamfistedly used allegory to talk about the monsters of human history, with both the Daleks and Cybermen serving as stand-ins for Nazis. But in Rosa, the writers put away allegory and just show us the truth of human evil, that the scariest monsters aren’t homicidal aliens or genocidal robots, but normal everyday people.

I appreciate the show’s sustained get-to-the-point –again, working class– sensibility. Beyond the racist townsfolk, who are the true monsters, the nominal villain of the episode is a time traveler whose veneer isn’t a pastiche of the mustache-twirling world-dominating supervillains the show typically offers, but a simply vile and horrifying person with a lust for ugly violence. It is to-the-point, naked, and raw.

The episode rises to greatness, though, not for its tonal choices, but for doing one remarkable thing: it summons the heart. Yes, I teared up at several points. Perhaps as a racial minority myself, the experiences shared by the show’s minorities, and their individual reactions to the actions of Rosa Parks, were exhilarating and humbling. And, not so weirdly, I found myself thinking about the night when Obama was first elected President, how I found myself shedding a happy tear then, too.

So, how was Jodi Whittaker? I didn’t much notice her, to be honest. And that’s probably a good thing. I started tiring of the Nu Who when all the stories became about the mysterious Doctor, and not about, you know, the stories themselves.  For now, I am very pleased with the set of companions and the types of stories the writers are choosing to tell.

But, hey, we’re only three episodes in. Give them time to disappoint me.

2 thoughts on “Thoughts on the New Doctor Who, the One Without the Penis”